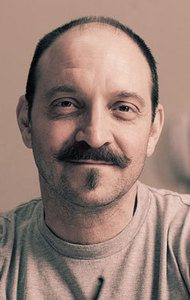 As a designer, Victore continually strives to make work that is sexy, strong and memorable; work that tows the line between the sacred and the profane. His paintings of expressionist designs can be seen on ceramics, surfboards, billboards and supermodels. James’ work has been exhibited at the Museum of Modern Art in New York and is represented in the permanent collections of the museums around the globe. His clients include Bobbi Brown Cosmetics, Esquire Magazine, Moet Chandon, Yohji Yamamoto, the School of Visual Arts and The New York Times. In 2010 his work was published in a monograph titled, “Victore or, Who Died and Made You Boss?” (Abrams). He lives, loves and works in Brooklyn.

In the particular lies the Universal
James Victore
Design